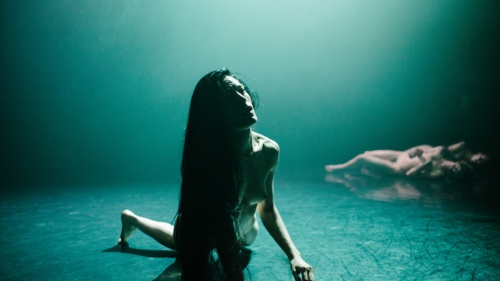 Michele Abbondanza and Antonella Bertoni stage three different 'masterpieces'. One musical: the quartet in D minor Death and the Maiden by Franz Schubert. A physical one: the human being in the excellence of its dynamics. A spiritual-philosophical one: the mystery of the end and its continuous gaze upon us. The Company's thoughts return to the human and what defines it: life and death, beginning and end are the miracles of our existence. This transition from one form to another has to do with choreographic art, the bearer of such a task; it is itself a flashing of images that continually appear and disappear. An example of musical writing that aspires to the infinite and accompanies the listener beyond a rational idea, towards the unknown and the transcendent.
Abbondanza and Bertoni follow the theme of Death and the Maiden by distinguishing the choreographic plane (the maiden) and the video plane (death). Schubert's dance and music belong to the world of the 'Maiden'. On the horizontal stage, the choreography strictly follows, to the point of evidence and excess, the musical impulses: 19th century and romantic.
Emphasising and betraying them. In this direction we find the bodies in their essence: deprived even of that last possible covering, physical and emotional. Naked, as if in the presence of death. The videos are the image of how 'Death' might see us. On the vertical stage (the screen), the eye of the video camera reflects the intrusive and ever-present vision of the maidens' antagonist. The sound is the silent one of the veiled and disturbing breath of death, suspended between the four movements of the string quartet.

Presence of full nudity on stage