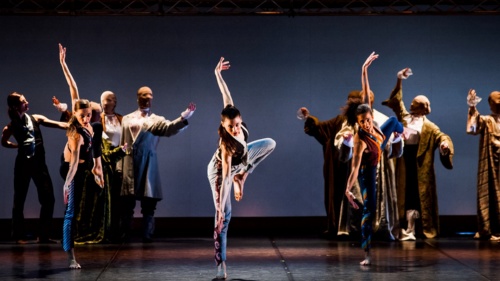 On the occasion of the 150th anniversary of Gioachino Rossini's death, Monica Casadei with the Compagnia Artemis Danza tackles one of the Pesaro maestro's most famous titles, Il Barbiere di Siviglia. The choreographer has imagined the performance as a futuristic 'action ballet': the narrative development involves the entire creative body of Artemis in a contamination of languages. But who is Figaro really? In Casadei's reading, Figaro is the prototype of the successful man in today's world. Rossini's hero becomes the emblem of one who succeeds in satisfying with effectiveness, vivacity and savoir faire the expectations of a society that demands every day to achieve its goals by optimising time and energy.
In terms of choreography, the character of Figaro is multiplied in the bodies of the entire company, where the performers act with the determination, energy and rigour of a special team: toned, gritty and hyper-concentrated, their dance manipulates time and space relentlessly, weaving and unravelling an infinite web of changes of direction, intersecting trajectories and inlays of movements.
Almost as if they were following the routes of crowded, noisy highways, the dancers untangle themselves with lucidity and martial energy, skilful cogs in the crazy mechanism of social living. The result is a performance of action, characterised by an atmosphere suspended between a shadowy past and a flashing, frenetic present: the unattainable image of a perfect man appears and disappears before the eyes of the audience to multiply in the dancers and in their technical virtuosity.