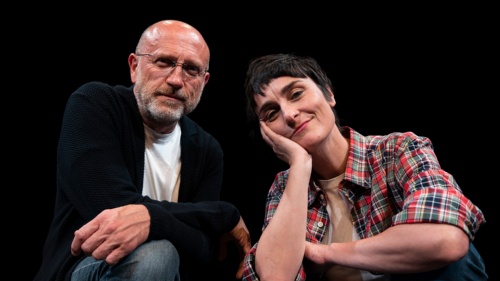 "In quella strano paese" is a theatrical story by Francesco Niccolini on the birth of Autonomy in South Tyrol in the form of a monologue, performed by Marta Dalla Via. It is the second stage in a trilogy of plays dedicated to the history and peculiarities of the South Tyrolean situation.
1991. In the days preceding the census, a South Tyrolean mother, married to an Italian man, tells her twin sons why they were given German and Italian names: thus begins Katharina's confession. A long intimate tale in which the woman interweaves the stories of the two branches of the family, the South Tyrolean branch to which she belongs and her husband's Italian branch, two very different, in many ways opposing stories. It will be her way to make peace with a difficult past and to cross the time from the options to the return to Italy of grandfather Kaspar with his wife Karin, hunger, disillusionment and poverty, and then the anger of his brother Oskar who will end up as a young man alongside the terrorists of the Night of the Fires. On the other hand, a grandfather quaestor who embodies the critical spirit towards the errors of government in post-Fascist Italy and who shows how uphill the road was for those who worked for dialogue and coexistence, amid misunderstandings, attacks, betrayals, demonstrations, arrogance, obtuseness and that very difficult negotiation that led to the Autonomy of 1972.

A production of the Teatro Stabile di Bolzano and Teatro Cristallo