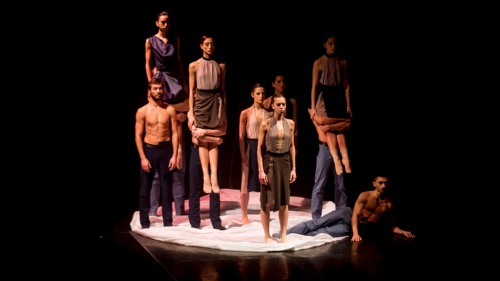 SCHUBERT FRAMES
A collage of famous Schubert pieces serve as the soundtrack to this work dedicated to the many souls of contemporary man, where love gives way to disenchantment, detachment to sharing, passion to fear, and vice versa, in a coming and going between crescendo and diminuendo, to reveal entire universes and secret bonds. The choreography of Schubert Frames is an abstract tale of loneliness and kindred souls, in an era such as ours, tired, turbid, disenchanted, tormented by a malaise that hangs in the air, but also anxiously searching for meaning and hope for happiness. A work dense with poetic images, which become one with the music and marry its compositional richness, intimately bonding with its inexhaustible variety and what it expresses.

GERSHWIN SUITE
Starting from the best pieces by George Gershwin and the suggestions coming from the paintings of another great American artist, Edward Hopper, Michele Merola has created Gershwin Suite, whose soundtrack anthologises not only the composer's most captivating pages, such as Summertime and Rhapsody in blue, but also the more romantic and intimate ones. Some scenes are thus inspired by the connection between the different pieces of music and various paintings - such as Soir Bleu, Summer in the City, People in the sun - by Hopper, a painter whose realism is considered an artist capable of depicting humble and simple moments of everyday life in a poetic and evocative manner.
On stage, so much variety takes on the manner of a film set, thanks also to a set design that changes constantly and a choreography that touches several keys, thanks to the versatility of the choreographer.